FIND THE PERFECT TRACTOR FOR YOUR FARM

Announcement of the unaudited results for the quarter ending 31st December, 2015 (Q3 2015-2016) in which the Tyre major JK Tyres & Industries Ltd reported an increase in consolidated profit by 20 % over corresponding quarter of the previous financial year.
Read More

Slow Down in Indian Tyre Market

This has added pressure on Indian tyre makers despite low prices of natural rubber over the last few months. Raw material cost as a percentage of sales has declined from 66 per cent to 57 per cent for MRF, India’s leading tyre maker.

“Recovery in demand from original equipment makers has been slow. The surge of cheaper Chinese imports is eating into the share of domestic tyre makers, including MRF, in the replacement market.

The industry had sought higher import duties on tyres. The International Trade Advisory Services has said over 60 per cent truck and bus radial tyre imports are from China at an average price of $106, which is lower than the raw material price.

As per market data received, imported tyres now constitute almost 20 per cent of the Indian market, with China being the largest supplier. 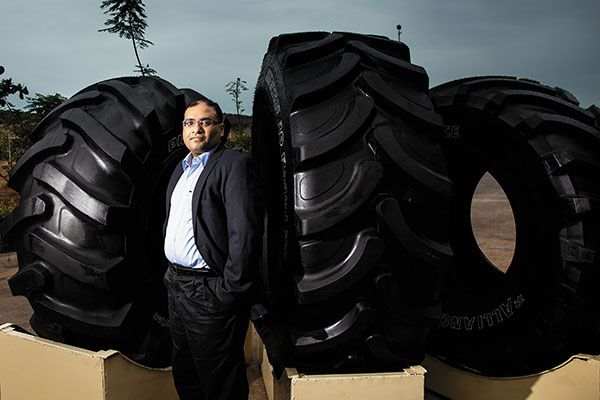 
Interests outside of work: He is an avid reader. The last book he read was The Everything Store, Jeff Bezos’ biography. The Mahansarias also donate for social causes

Why he won this award: For harnessing the competitive advantages of Indian and Israeli assets, and scaling up a niche, B2B business globally by paying close attention to end users across geographies. Also, for quick and exemplary execution of new product development

In 2012, an Alliance Tire field engineer noticed a growing problem on a tour of rural Europe. Industrial farmers there had been trying to move away from the traditional practice of loading harvested crops onto tractors in the field, which would then be driven out to the road and the crops transferred to the waiting trucks.

Instead, to eliminate the need for slow, expensive tractors, the farmers had started driving the trucks directly into the fields. But here was the rub: Conventional truck tyres, filled to high pressures to achieve greater speed on the highway, were damaging the soil and getting stuck in the mud.

The engineer shared this observation with Mumbai-based Yogesh Mahansaria. For the founder and CEO of Alliance Tire Group (ATG), this was an obvious opportunity. By 2013, an R&D team in ATG’s Israel plant had developed a solution, claiming to have created the world’s fastest agri-transport tyre: At twice the width and inflated to half the pressure of conventional truck tyres, the new product allowed farmers to bring the trucks directly into their fields and still reach speeds of 100 kmph on the highway. Each tyre is priced at Rs 1 lakh.

This ear-to-the-ground approach has driven innovation for Mahansaria, 39, and allowed his company to offer over 2,600 varieties of tyres. Today, ATG sells off-highway tyres such as these, used by farm tractors and heavy-duty construction vehicles, to dealers and distributors, in over 120 countries.

The company has grown at 10-15 percent per year, while the $12 billion market ticks over at 3-4 percent. The off-highway tyre business is linked to the health of heavy industries such as construction and mining. When they slow down, so does the demand for tyres, says Mahansaria. “Our international competitors are growing at two percent a year,” he says. “In 2014, almost all our European and American competitors have had negative volume growth, whereas we have had significant double digit volume growth.”

His journey has been an intriguing one (profiled in depth in the October 4, 2013, issue of Forbes India). This is his second swing at the agriculture, construction and forestry tyre market. After his father and he unceremoniously parted ways from the family’s off-highway tyre business, Balkrishna Industries (BKT), in 2006, private equity giant Warburg Pincus teamed up with Mahansaria for a new venture.

Together, they paid around $150 million to buy struggling Israeli tyre-maker Alliance Tire in 2007. In 2008, they set up a manufacturing plant in Tirunelveli, Tamil Nadu, and, in 2009, bought the US-based GPX, a tyre distribution company. Warburg Pincus cashed in on their successful partnership in 2013, when Kohlberg Kravis Roberts (KKR) bought out its 80 percent stake for an undisclosed amount reported to be around $650 million.

The road ahead may seem smooth, but Mahansaria has navigated tough circumstances to build a global B2B business through deft acquisitions and an attention to varying market needs across continents. After eight years, his revenues, at Rs 3,450-3,600 crore for the calendar year 2014, are almost on par with BKT, which is at Rs 3,587 crore for FY14. Without a question, then, this next-gen entrepreneur’s second innings is evolving into the defining one.